HCS- For Hoover High School Art Teachers Ahmad Austin and Nelson Grice, it is hard to separate art from who they are.

To both of these men, art feeds their souls and the souls of the people.

For Grice, becoming an artist was something he set out to do when he was a child. It was an art teacher in high school who changed his life, and because of her, he is a high school art teacher today.

Grice, who is set to retire at year's end after 25 years of teaching at Hoover High School, always had a relationship with the Shelby County Arts Council. He taught classes for them over the years, and when he learned the county was building a new art center, he joked that all they needed was a foundry.

That very next day, he got a phone call asking if he would run a foundry.

About two years later, that art center is up and running.

When construction crews were doing excavation work for the building, they made a once-in-a-lifetime discovery. They found nearly 150-year-old millstones intact.

These relics would instantly become the centerpiece for Grice's sculpture that now sits at the front of the art center in Columbiana.

The bronze sculpture, fittingly named "County Seat," features bronze guitar necks, paintbrushes, and the millstone and can accompany people to sit on it and take a photo.

Once his time at Hoover High School is finished, Grice will lead the foundry at the arts center. For him, this marks a picture-perfect way to end his career.

"It [sculpture] does not really belong to me," Grice said. "It belongs to Columbiana, my colleagues, my students. I want them to have pride in knowing that they were there for me and play a big role in my life." 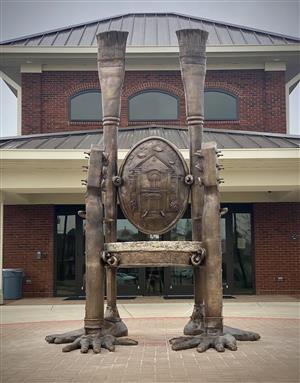 Roughly 30 miles away from Columbiana sits the Callahan Eye Hospital.

Fellow Hoover High School Art Teacher, Ahmad Austin, was asked by the Vulcan Parade to paint a Vulcan statue that would be featured at the hospital.

Like all great artists, Austin had a vision and wanted to make sure it looked like the artwork on the building.

After many brushstrokes, the man who overlooks Birmingham now has a Hoover High School creative spin on him. 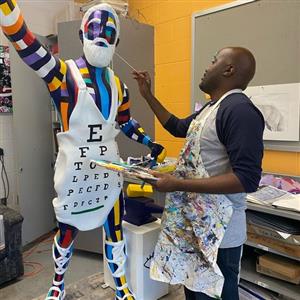 This project was very personal for me because I've never created artwork for any city and to be a part of this within my hometown is awesome," Austin said. "What is also cool is that the statue will remain up for a lifetime. So it is pretty cool to be able to show my kids and my students that I have a visible piece within the city."