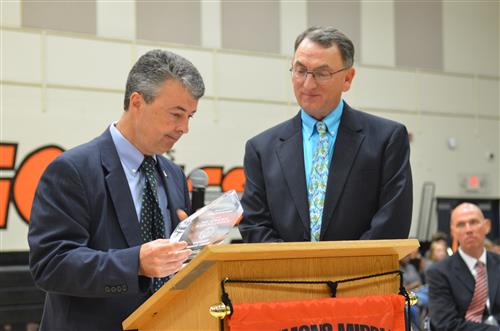 “In these times, we are all intensely aware of the serious responsibility our schools carry for the safekeeping of our children,” said Attorney General Marshall. “Recent events have been heartbreaking reminders that we must remain vigilant and committed to providing the best protections possible in Alabama’s schools. I am pleased to carry on this important tradition of the Attorney General’s Office, to recognize schools throughout our state for dedication and excellence in keeping students safe. Each day that parents leave their children at school, they are entrusting what they hold most precious into the care of schoolteachers, principals, school resource officers and other staff. With these awards, we honor those who have achieved particularly high standards and set examples that others may follow. We are grateful for their service and commitment to protecting the children of Alabama.”

In presenting the award today Attorney General Marshall said, “The Attorney General’s Office is proud that Simmons Middle School was selected as one of the 10 winning schools in Alabama for 2017. In making this decision, judges noted many things that distinguished Simmons Middle School: the use of technologies like ‘The Bully Button,’ an online form that reports bullying directly to the principal, and ‘Panic Buttons’ which put the school in lockdown; an emphasis on training parents and students about digital media and dangers associated with it; and volunteers called ‘Hallway Dads’ to keep the school safe and build a culture of community involvement.”

Simmons Middle School Principal Brian Cain said, “Our staff, students, and community are committed to providing a safe school environment. We appreciate very much this honor from Attorney General Steve Marshall in recognition of what we have achieved together to make Simmons Middle School a safer place.”