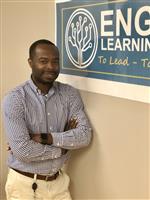 (HCS) - Montgomery native Tony White was curious about electronics at an early age.  In fact, he once disassembled his family’s desktop simply to determine its inner workings.  That was a defining moment which ignited his passion for technology and began his trajectory toward Montgomery’s Brewbaker Technology Magnet High School.

“At the time, it was one of the first of its kind. Every classroom had desktop computers. The majority of assignments were online. Once I graduated, I enrolled at UAB where I majored in Information Systems,” White said.

Now a married father of two (one of those two due in June), White serves as Database Administrator for Hoover City Schools.  He maintains our Student Information System - no small task in today’s world of cybersecurity and data governance. White’s training and expertise have prepared him for this moment in his career.

“I must say I was nervous about coming here. I came from a smaller district where I pretty much knew everyone and I was very proficient in my job. I was very comfortable and overall loved what I did. Stepping outside my comfort zone was a challenge. But at the end of the day, I'm glad I did. My experience at Hoover City Schools has been great.”

White says Hoover City Schools’ Technology Team enjoys renown as best in the state.  Now a part of the team, he understands the reputation.

“It's awesome to see how well Bryan (Phillips, Chief Technology Officer) and Kelli (Lane, Instructional Technology Coordinator) manage the department while wearing several different hats. They command the room when they lead a meeting and have earned the respect and attention from not only their peers at Hoover but also their peers across the state.”

As White continues to hone his already sharp tech skills, he balances fatherhood with his service in the United States Air Force.  Learn more about Tony White below.

Q: What does a Database Administrator do?
A:  My role is to maintain our Student Information System, analyze the data, and send the data to vendors which host applications that directly impact our students. From the district perspective, I make sure that all errors are cleared up from reports sent to the state, write queries that pull data from our database that allow stakeholders at CO to make appropriate decisions, and work as a technical liaison between the State Department of Education and school administrator to make sure the rules are in place to report our data accurately.

Q: What is your experience prior to HCS?
A: Prior to coming to HCS, I was a Systems Administrator at Trussville City Schools. I started working there two months after my return from deployment in Iraq in 2011. I graduated from UAB five months prior. I began as a PC (personal computer) technician) and then was primarily assigned to Hewitt-Trussville Middle School performing daily support with respect to teacher and student workstations/equipment. I was able to work with great Network Administrators that allowed me to learn what they do from the district side of Information Technology (IT). A couple years later, I was promoted to Senior Support Technician and was delegated a few administrator-level responsibilities while still focusing on my technician duties at the middle school. A year and a half later, I was promoted to Systems Administrator, managing district servers/applications.

Q: Why did you seek out Hoover City Schools? What was appealing?
A:  Hoover City Schools was always considered the premier district within our inner circle.  We would always ask,"What's Hoover doing?" when we ran across an issue or an opportunity for improvement. The chance to be a part of that brain pool intrigued me.

Q: How do you view your role and its connection to student success?
A: Technology is an integral part of student success. Textbooks are digital now so I need to make sure those textbooks are assigned to each student's profile. Also, I need to make sure student data is available and presented in formats allowing teachers and administrators to make informed decisions. We can then discover at-risk students early to prevent failures. 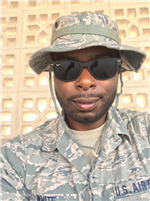 Q: Tell us about your service in the United States Air Force.
A:  I've been in the Air Force reserve for eleven years now. I work in Aerial Logistics at the 80th Aerial Port Squadron. My role is to create load plans on how cargo and passengers are positioned on aircraft. The goal is to make sure the aircraft is balanced and weight is distributed properly. I've deployed to Balad, Iraq and Al Udeid, Qatar. In both locations, heat was an issue but I enjoyed my experience. I worked alongside great people that to this day, I consider family.

Q: What is your favorite restaurant in metro Birmingham and what are some of your hobbies?
A: I love chicken so two of my favorite restaurants are Hattie B's and Eugene. These restaurants are located downtown and I normally go to each one at least once a month. Mostly, my hobbies revolve around whatever my son is interested in. We are into biking now but we also play football, basketball, and soccer. When he's not running them into walls, we tend to fly drones often. I also love to read up on new tech that's coming out. I also work part-time at Best Buy so I can remain exposed to new technology and share the benefits with my family and friends.