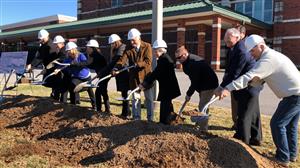 (HOOVER) - So much about education and life itself is recognizing and honoring the past within the present and using those stories to craft the narratives of today. Lessons about ancient history are shared with students so that they not only see the story’s importance in the past, but they see how those stories are relevant to the present and future. Such is the case with scheduled projects on two Hoover City Schools campuses. Both Bluff Park Elementary School and Berry Middle School are taking cues from the past to welcome the future.

Matt Wilson, Coordinator of Operations, shared that the district has approved and budgeted $2.1 million dollars to create the new Hoover Student Services building in the vicinity of the old Bluff Park Elementary School which is currently vacant. This renovation will include demolition of some current structures and construction of new structures while maintaining the core of the historic Bluff Park School that has been a part of this campus for more than a century.

Originally, Bluff Park Elementary was a one-room schoolhouse known as the Summit School, built in 1899. It later became a two-room school, and in 1953, two additional classrooms were added making a four-room home for learning. As the Bluff Park and Hoover area continued to thrive and expand, more room was needed and eventually the old Bluff Park Elementary gave way to the present-day structure, and the old building was most recently used as a home for Artists on the Bluff.

Demolition will begin at the first of the year, and Wilson hopes to have the bid approved for new construction by mid-March. The new construction will mimic the same archway of the old building in the hopes that the new addition looks like it has always been there, bringing the past into the future.

Wilson stated that they will utilize the old bricks to the extent that they can and do their best to honor the history of the school and its importance to the community.  If all goes as planned, the bid should be approved by the board by April of 2020, and Wilson hopes to have the new building and parking area completed by Spring of 2021.

Changes are also being made at Berry Middle School which will add a three-story addition to the existing school and will be housed in the parking lot to the left of the current building. This addition will add thirteen classrooms within its three new stories and includes an enclosed walkway that will lead students and teachers to the new parking area.  Berry Middle School has more than 1,200 students and is operating near capacity.  The added square footage will allow for future growth as the eastern side of Hoover builds out.

This multi-million dollar expansion had a ceremonial groundbreaking on December 18, 2019 - with actual construction beginning in January 2020. The project will take twelve to eighteen months, and Wilson hopes to be wrapped up in the first quarter of the 2021 year.

Wilson brings twenty-six years of construction and operations experience with him, having joined Hoover this past July. He looks forward to the challenge of Hoover City Schools' newest capital projects.

“Keeping the history while providing a new structure is both a challenge and an honor,” Wilson said.

See more on HCS expansion projects from the Hoover Sun.