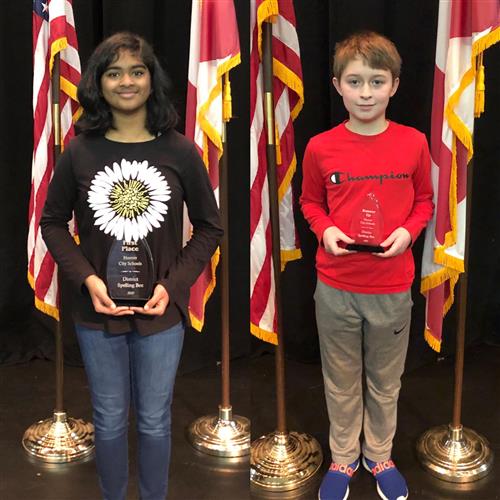 (HOOVER) - Bumpus Middle School sixth-grader Hasini Grandhi admitted to being “really freaked out” as she strode to the podium to spell her first word in the Hoover City Schools District Spelling Bee, held recently in the theatre at Spain Park High School.

Fifteen words later she was more comfortable — and victorious — as she correctly spelled “cuckoo” and then “syllabus” to be crowned champion, with Bluff Park Elementary fifth-grader Colin Smith finishing runner-up. They outlasted students from all other Hoover elementary and middle schools.

Grandhi will now represent Hoover in the Jefferson County Spelling Bee on Feb. 4, as will Smith, with their eyes on the State competition March 21 if they move on.

Congratulations to one and all for making it from their classroom, grade-level, and school-level spelling bees to represent each of their schools.

Grandhi, 11, said she studied all the way to Spain Park in the car as she wanted to do her best and to try to calm her nerves.

“I was kind of surprised to have got so far (qualifying from her team, grade and school level). I like to read a lot and that helps me recognize a lot more words. My favorite genre is fantasy and adventure.

“At the (District Spelling) Bee I spelled the words in my head that other children were asked and that helped me relax when it came to my turn.”

Kristyn Robinson, who teaches sixth and seventh grade, is in her first year as Spelling Bee coordinator for Bumpus and in her 15th year teaching at the school.

She noted her pride in Grandhi’s performance.

Grandhi, who hopes to be an author or doctor, said the official Spelling Bee app has been very helpful for her spelling, and vocabulary, preparation. She said her parents have also been supportive, helping her review words.

“Since I was really little, I’ve always loved to read and been good at spelling,” Smith, 11, said.

He certainly was delighted to be heading to the Jefferson County Spelling Bee.

“I think it was the sixth extra round (he and another student went head-to-head after they both missed a word in the 15th round) that I won (he spelled ‘jalapeño’ correctly).”

Allison Dolan, library media specialist at Bluff Park and a 15-year Hoover City Schools employee, said Smith “had read every graphic novel (glorified comic books with chapters) that she had” in the school library.

She noted Smith studied mostly on his own, but she provided him with numerous lists of words, via a Google Doc, that the Spelling Bee deemed appropriate.

Middle school, high school and college all beckon for young Colin, but he noted he wanted to be an Air Force pilot when he “grew up” or “maybe a news reporter as they talk for a living and I like to talk.”

(I, the reporter here, can vouch for that!)