Home of the Buccaneers

HCS- When you walk into Janet Ort’s classroom on the third floor of Hoover High School, the idea that you are in a standard classroom melts away.

The breathtaking photographs and designs immerse you into the world of Environmental Science.

For Ort, who has been at Hoover High School for more than 20 years, she has earned scholarships for professional development experience. She has done research fellowships. She has won awards along with her students.

But, she can add a new accolade to the extensive list.

For Ort, she says it is always nice to be recognized for your accomplishments, but she was humbled knowing that several strong candidates were up for the award. While she is honored to win this award, she is committed to seeing all teachers be recognized for the great work they do daily.

To her, an award like this would not be possible had it not been for the support of the Hoover High School administration, fellow faculty, and students.

“It takes administrative support,” Ort said. “It takes being willing to meet on a Wednesday or Saturday after school. It takes people being willing to say, ‘if you can build a class or build a program, then we’ll work with you on that.’” It takes community support and telling people that this is an important process. It takes kids believing in you. Some of these are ideas that I have been interested in for a long time, but the kids had to trust me and say, ‘OK, let’s go!’” 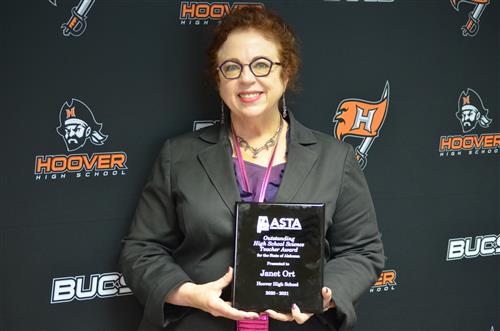